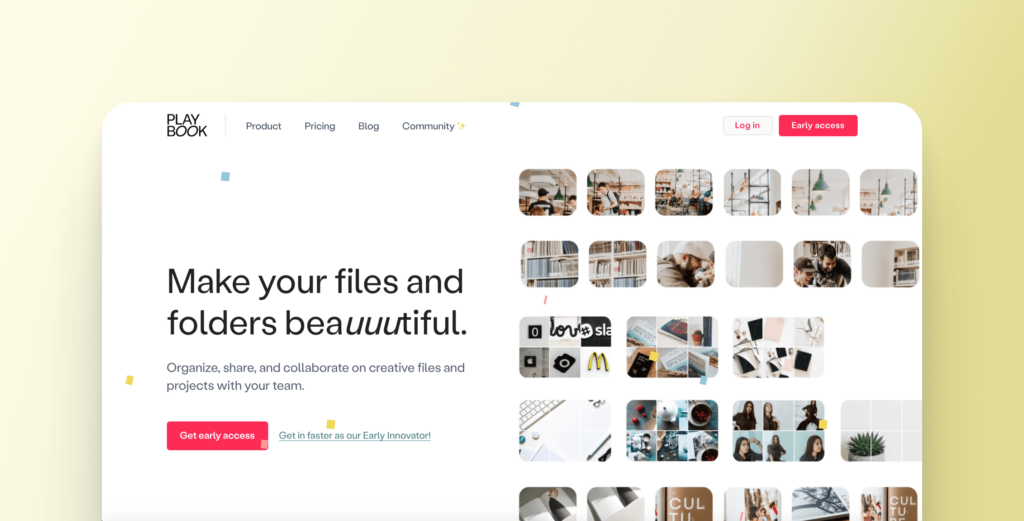 Playbook is a startup offering a new take on cloud storage, specifically aimed at those in the creative space. Think artists, designers, photographers, and other types of content creators. The problem with existing cloud storage solutions – Dropbox, Google Drive, etc., is that they’re not really optimized for these kinds of creatives or content creators. Too often, these apps become a dumping ground for creative assets – no visual organization, collaboration, dedicated workspaces, ability to sort the way you want to, and an overall lack of automation and integration with other creative tools.

The result? In comes Playbook, a platform promising to intelligently organize, share, and collaborate on files and folders with your whole team. Playbook innovates on these existing tools by providing users with a much-needed range of functionality and features and through limiting their focus towards a defined target audience. 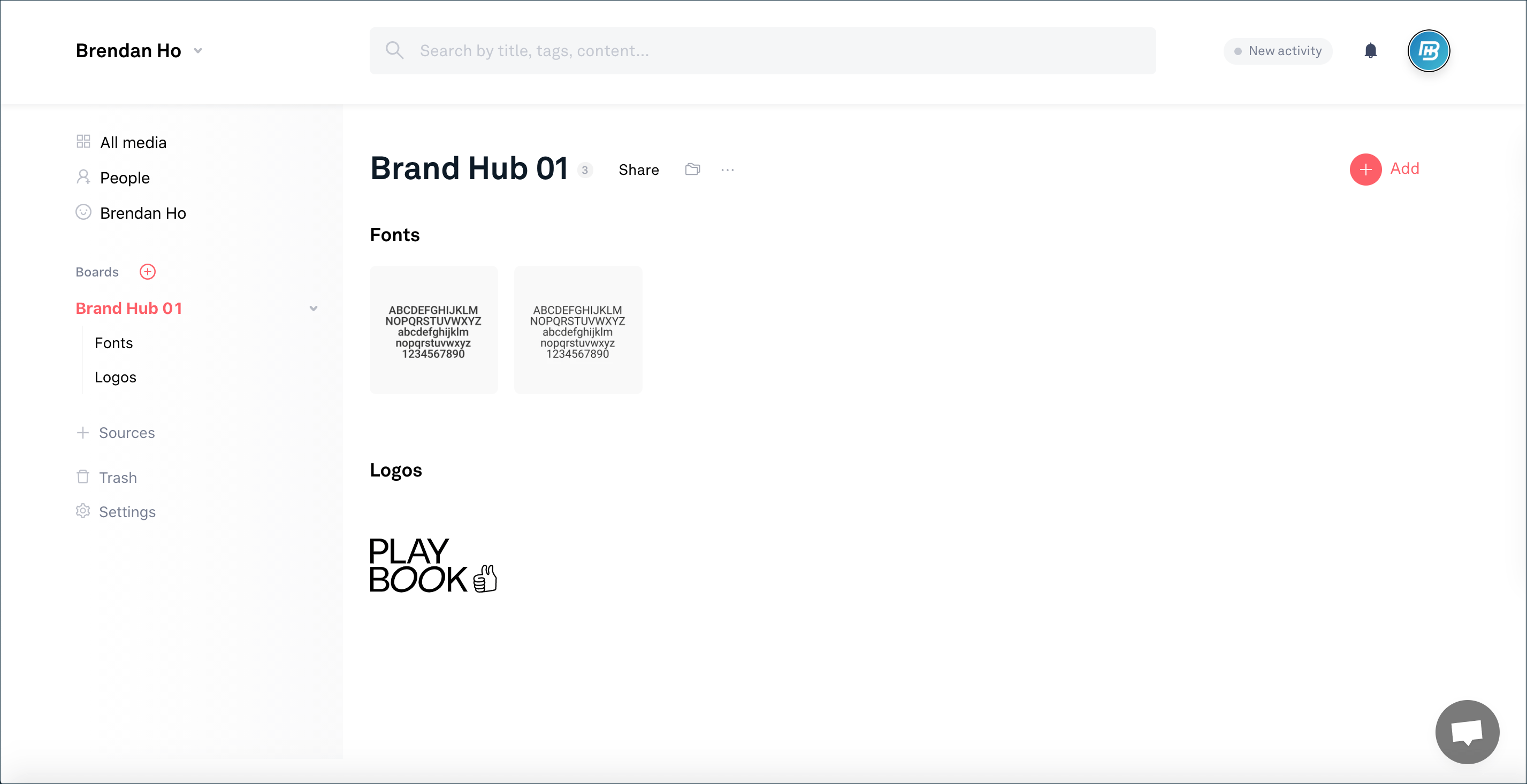 I first came across Playbook on social media after an acquaintance shared a link to their sign-up page. I was particularly interested in their pre-launch growth strategy.

There are a number of things Playbook did that were interesting, and I wanted to capture some of those ideas in this post.

Playbook offered free gifts in order for a sign-up.

Below is one of the 3D illustration sets they offered. All you had to do was sign-up with your email to claim it. These gifts were especially relevant towards creatives, their targeted audience segment. 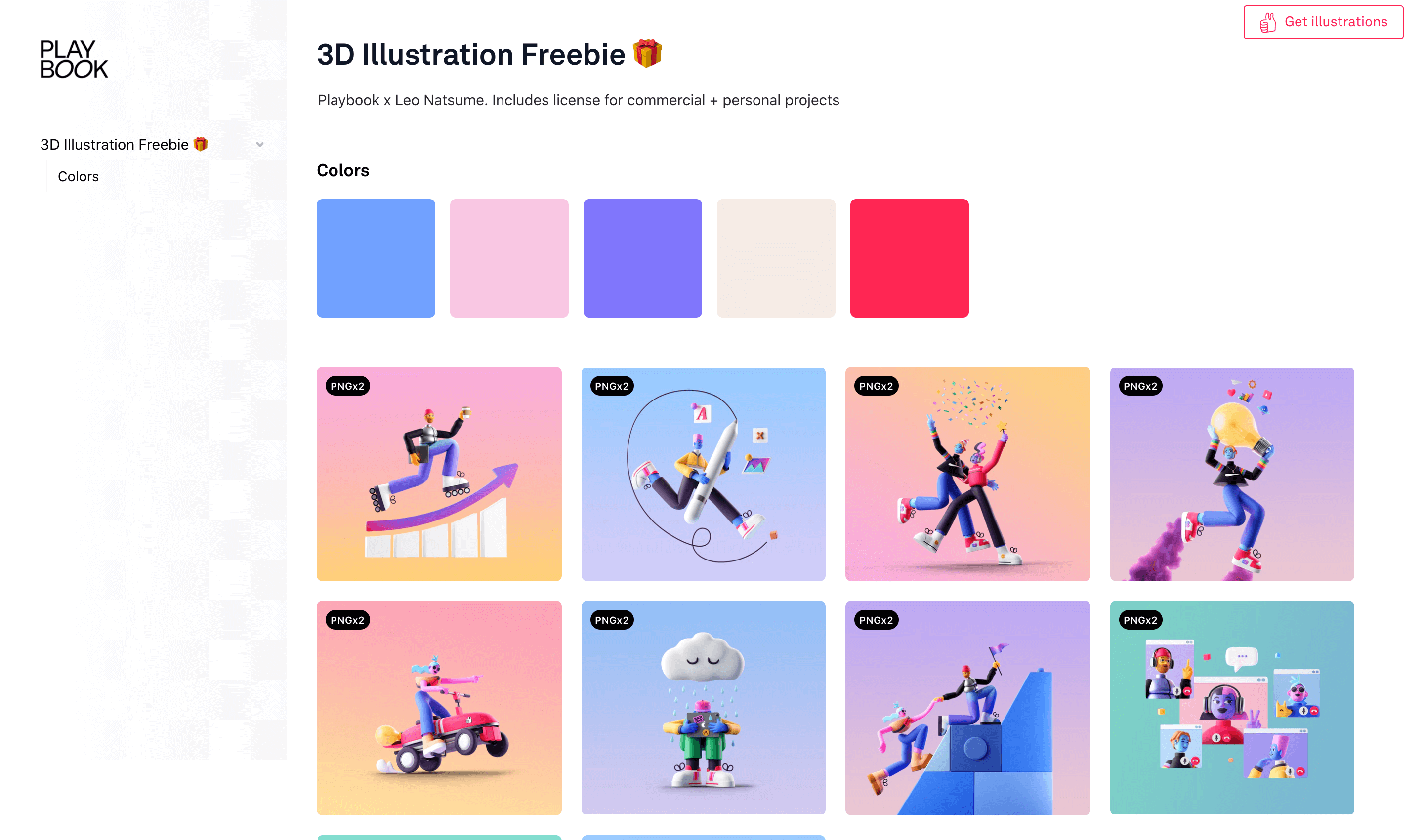 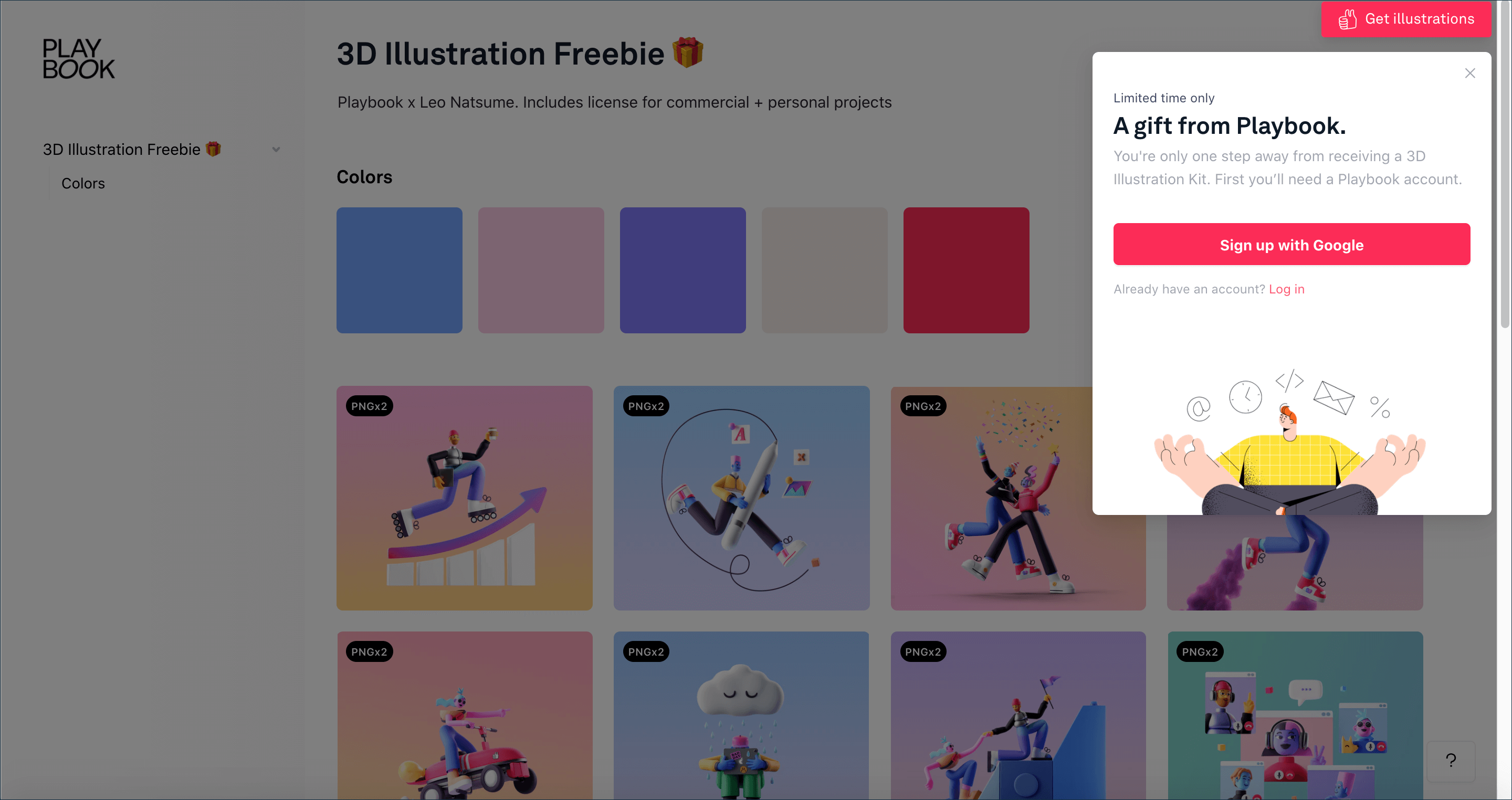 2. Harnessing the power of scarcity

While Playbook offered free gift sets, the catch though was in the limited available number of sets to claim.

In this case – just one thousand illustration sets were available and up for grabs. After those thousand sets were claimed, you’d need to sign up to be waitlisted for the next thousand to be claimed. It’s one thing to be able to sign-up anytime to receive a gift; it’s another thing to sign-up when you realize there are only one thousand available and they could be gobbled up at any moment.

This created a sense of scarcity, demand, and value in the gifts they were offering, prompting users to leave their email to return back when the next gift(s) would be announced. 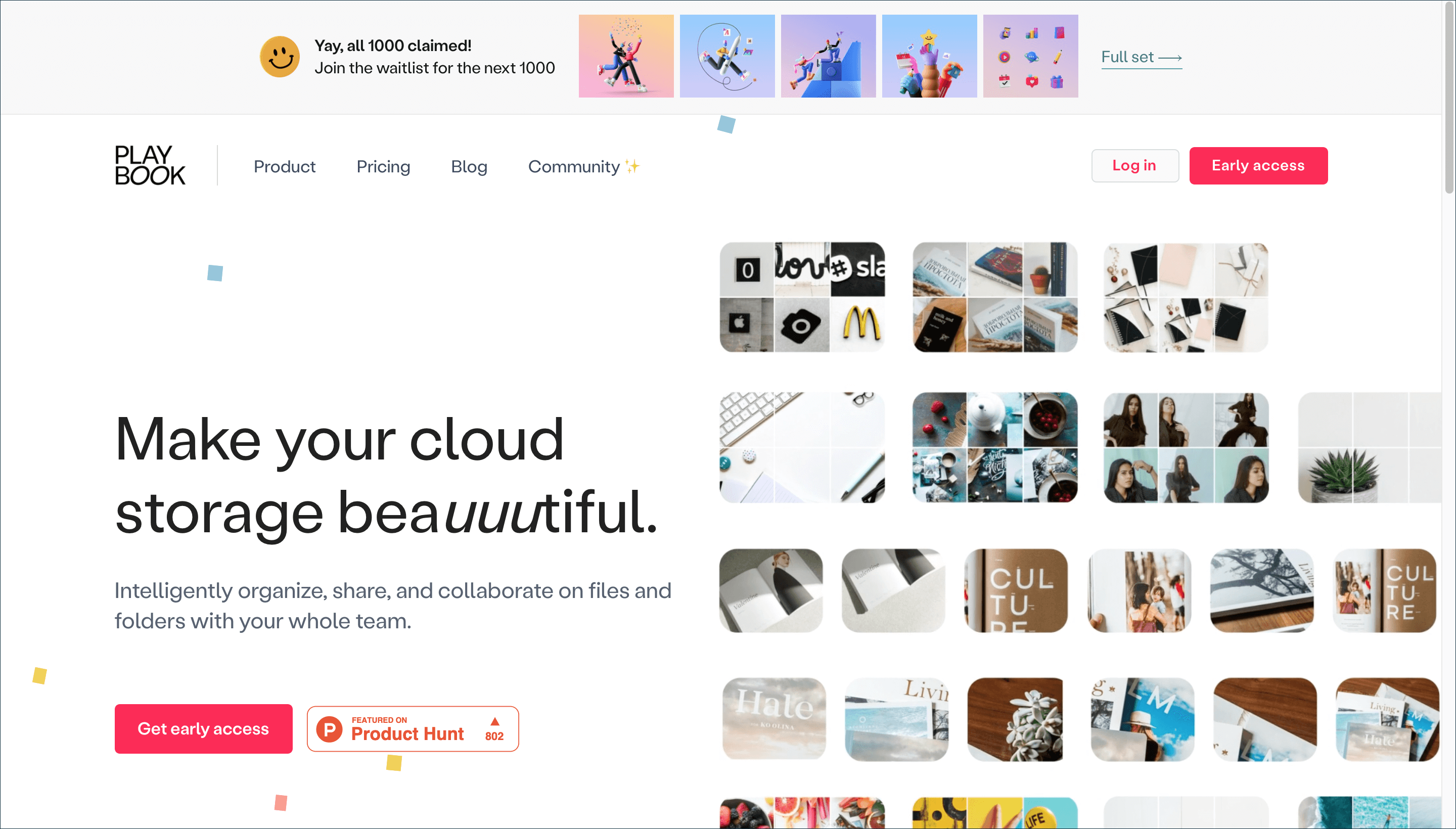 3. 4TB of storage for completing actions

First, users would need to mention “Design” during the sign-up process. Then, they would need to upload at least 20 pieces of work. Finally, they would be upgraded to Playbook’s “Pro” plan which included a whopping 4TB of storage space, all for free. Not a bad deal at all, considering Dropbox currently charges $11.99 per month for only 2TB of storage. 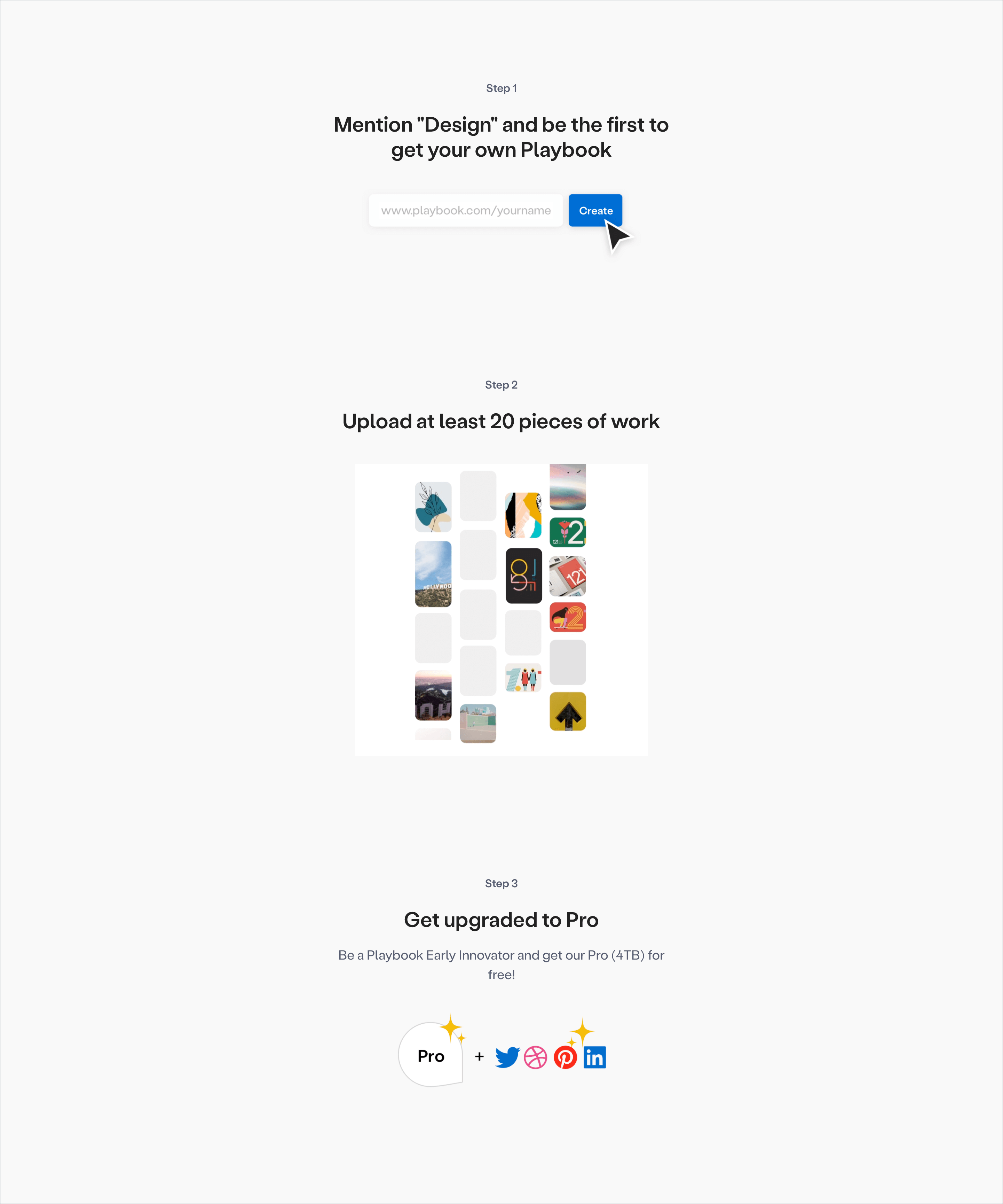 4. Exclusivity to become an Early Innovator

Playbook also sent out a number of “special” invitations (in addition to having some of their own advocates post invite links on social media), creating demand and the idea of being part of their “Early Innovator” community.

There is some specialness about being considered an “Early Innovator”, and some people may even consider it a badge of honor or as if they’re part of an exclusive group of sorts. Regardless, it seems to have worked for Playbook.

As an Early Innovator, you also get the 4TB storage space without needing to complete the two actions mentioned above. 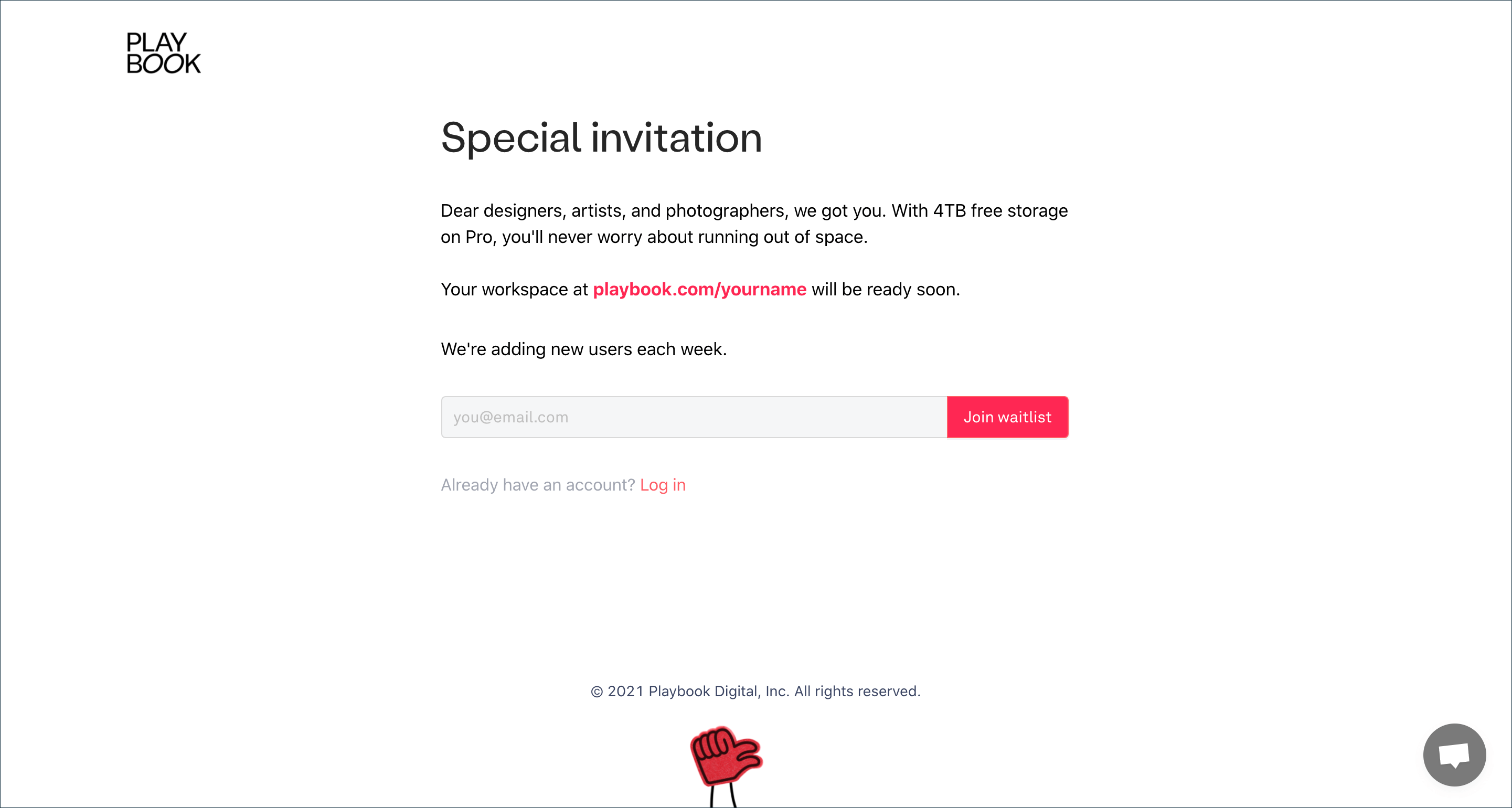 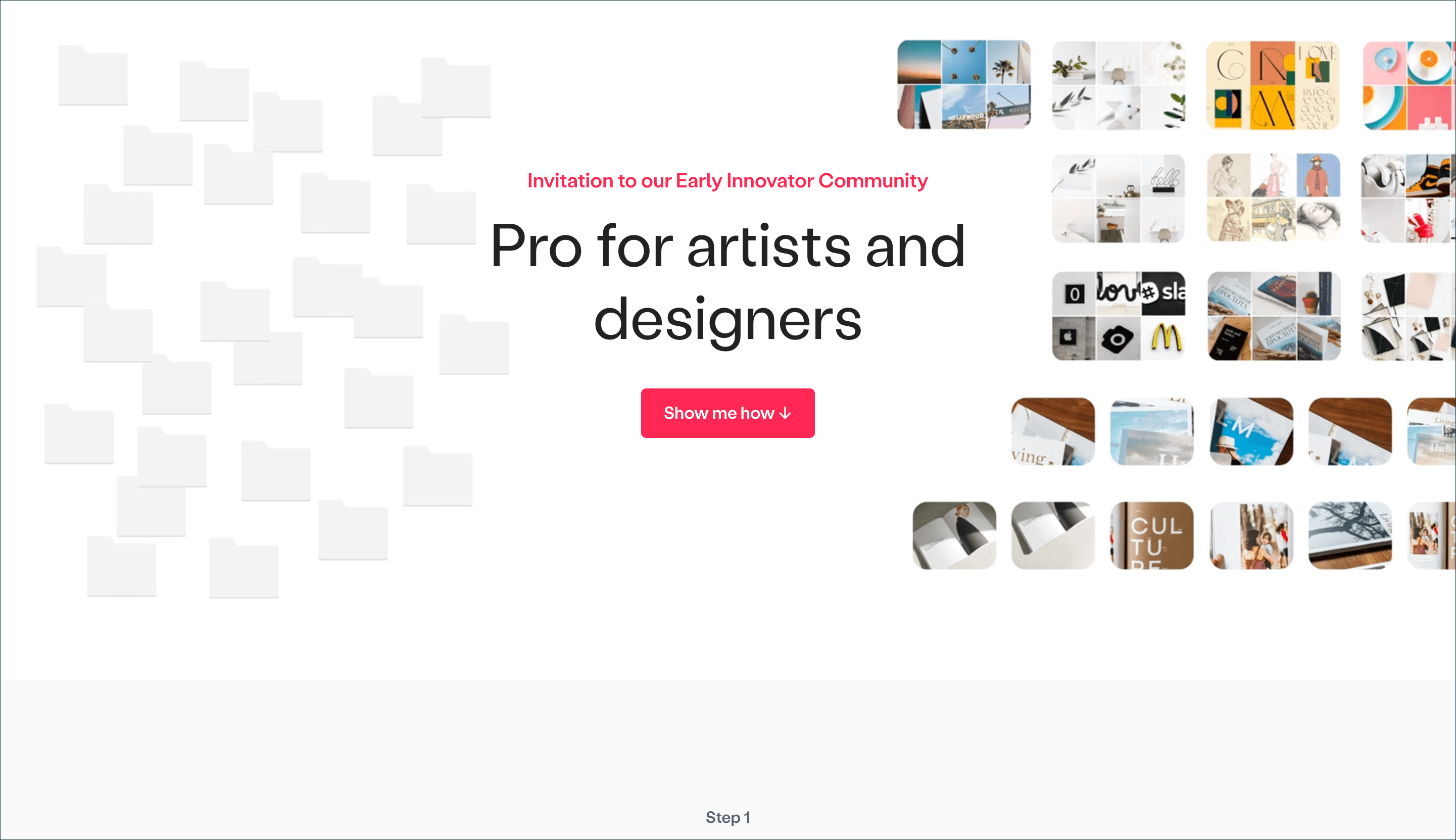 5. Claim your own username

Like most prominent social platforms these days, username handles instill a sense of ownership; a personal spot within that platform that is unique to them and theirs only.

Playbook is the first cloud storage platform to provide username handles, and again harnessed the power of scarcity by allowing users to “reserve” their username handles before somebody else snatches them up. 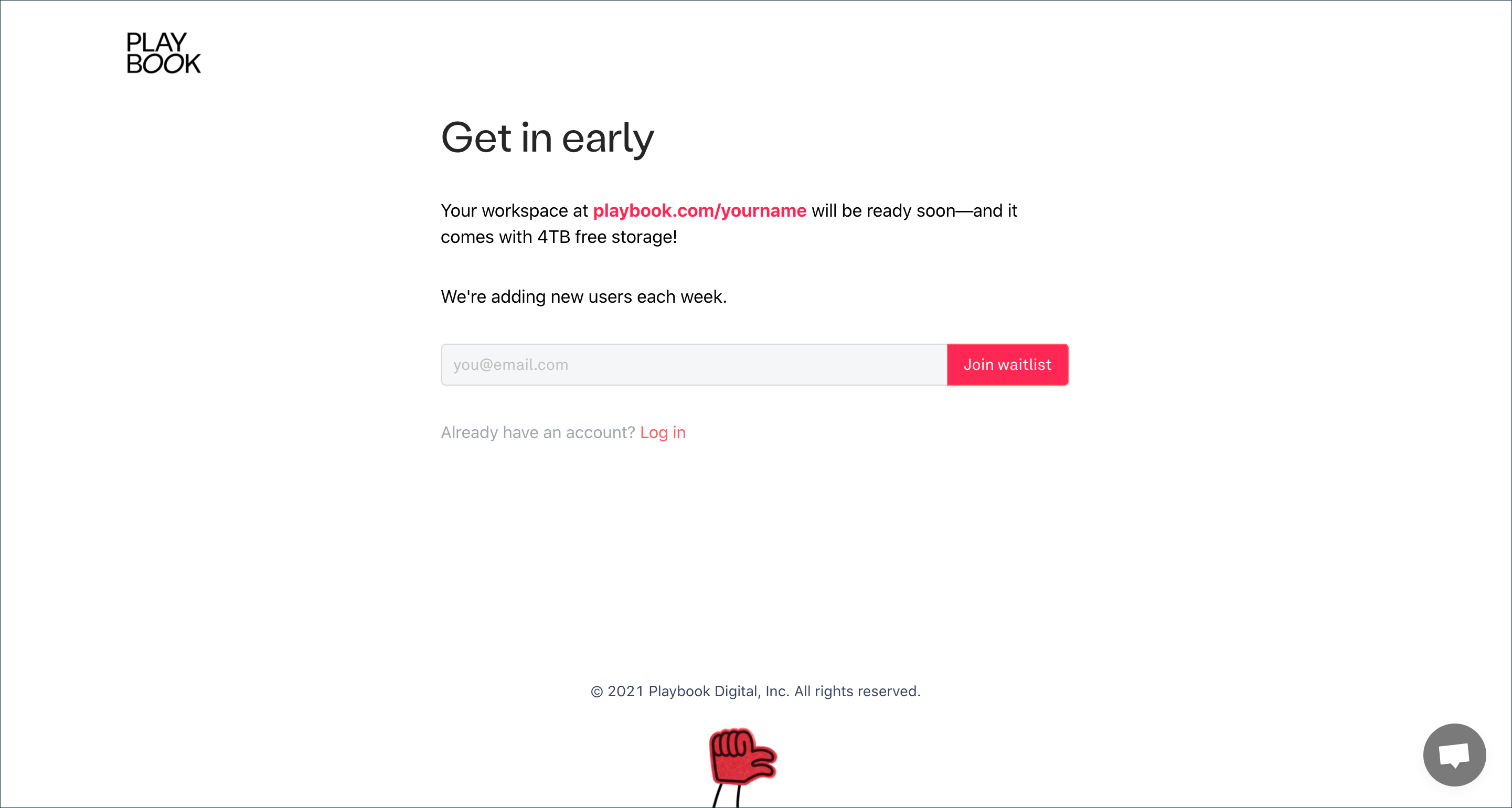 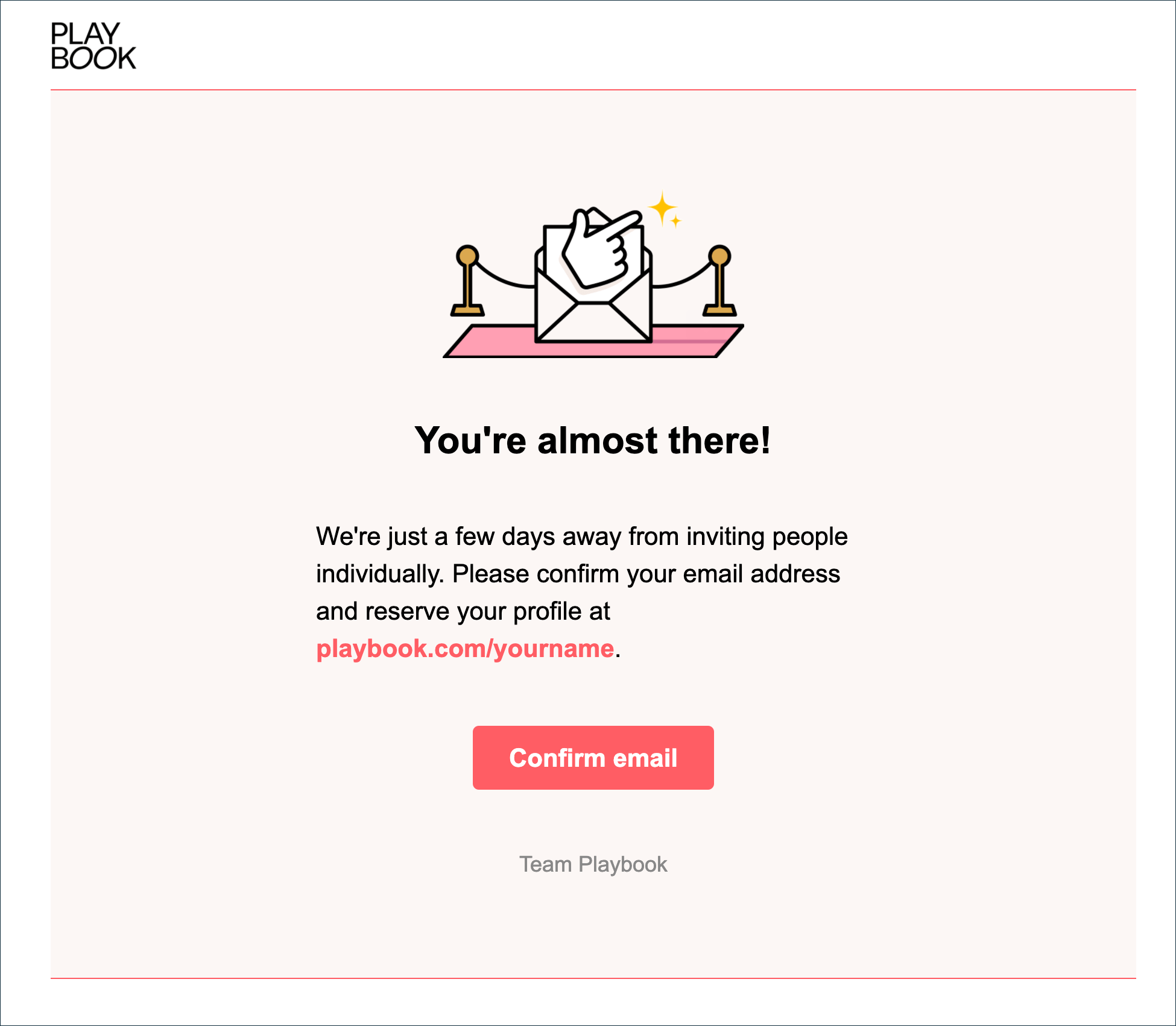 Playbook looks to be heading in the right direction, having amassed over 10,000+ users with this approach and recently raising $4M in funding.

It’s still an early-stage startup, so we have yet to see whether it is able to massively disrupt the existing giants like Dropbox and Google Drive. Still, I like how they’re deliberately focusing in on their defined target audience: creatives, and it’s time we get some innovation in the cloud storage space.

Since this post was geared around some of the tactics Playbook used to grow their early user base, here are couple of takeaways: 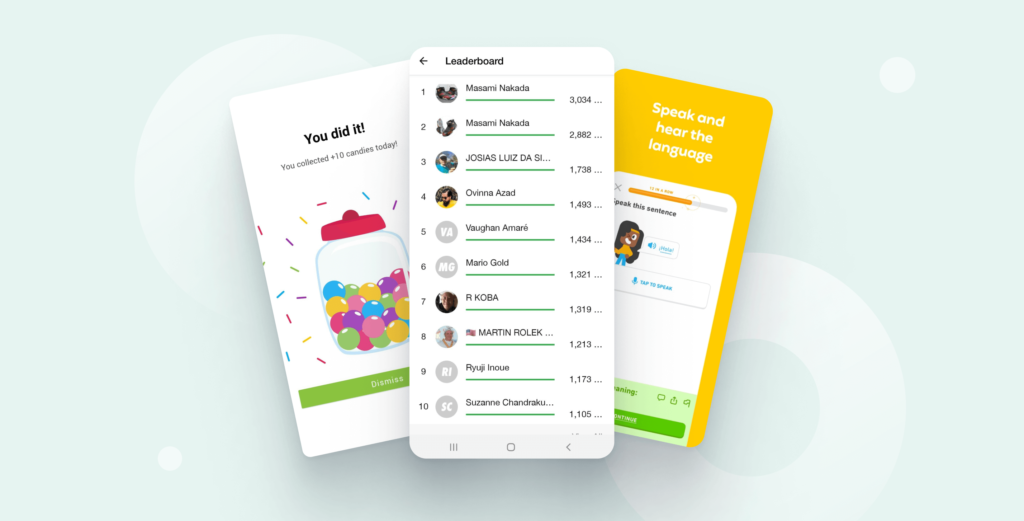 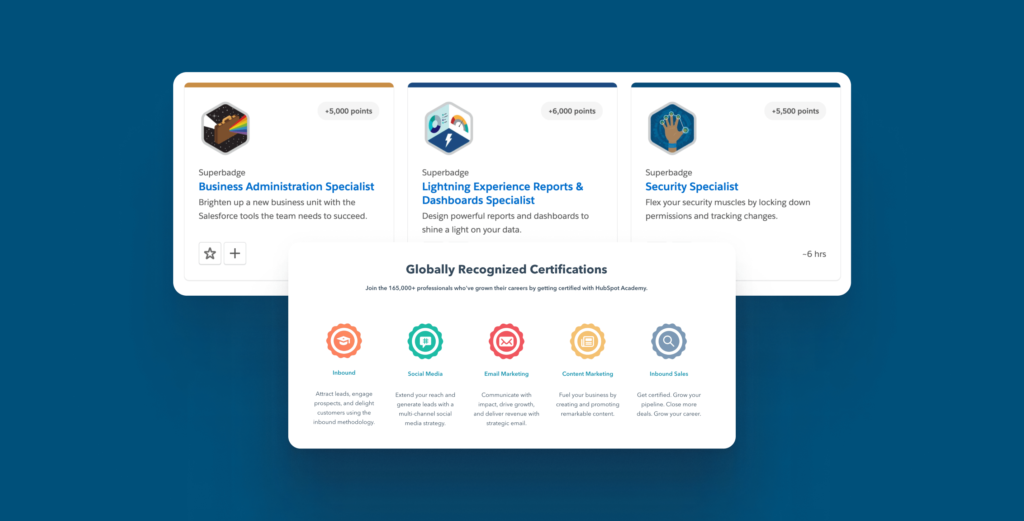 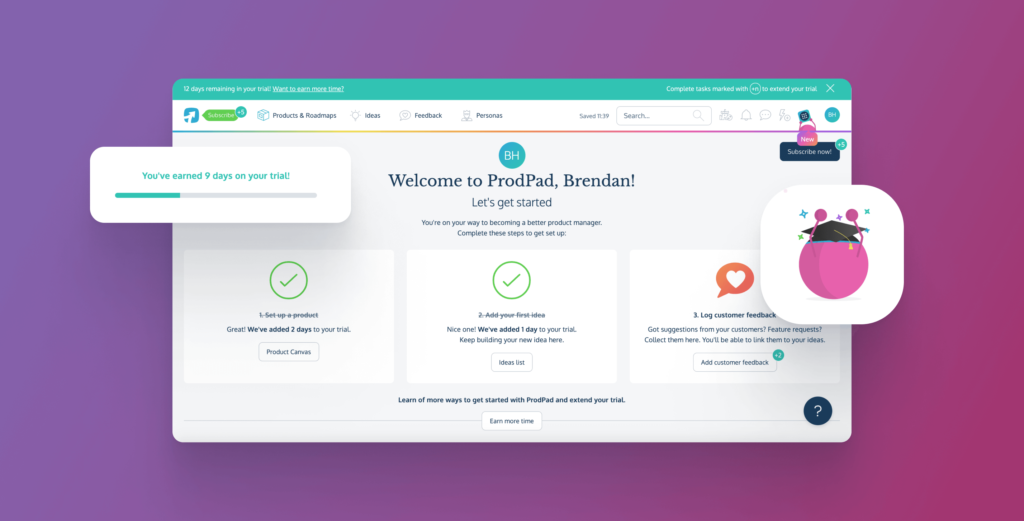 How ProdPad Uses Gamification to Onboard its Users 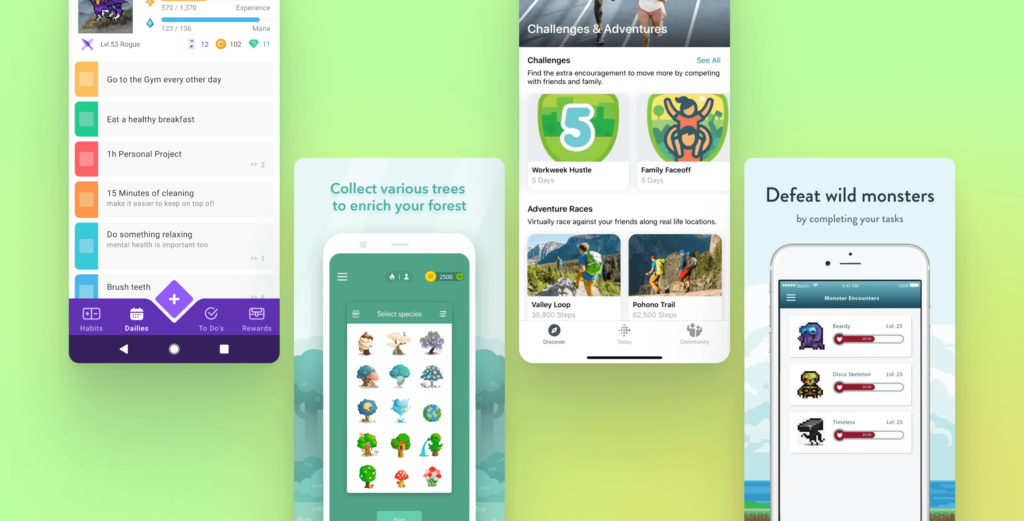 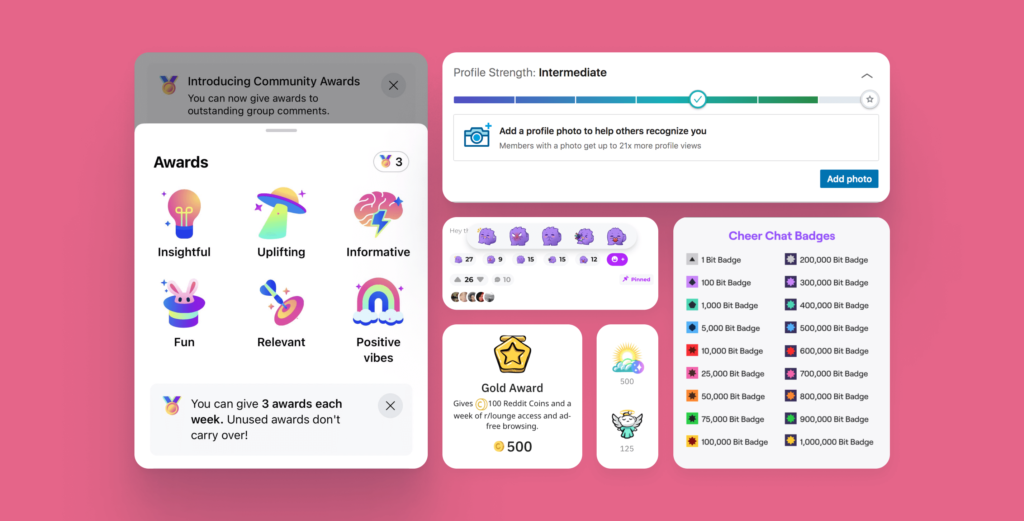